In 2016 I added to my .vimrc a mapping to get easier access to window commands in normal mode. I was pretty happy with it in my local setup but it broke my workflow when I edited files on remote servers. Over time this got pestering enough for me to take action and decide to solve the issue. I thought it was a good opportunity to experiment with Neovim floating windows.

In this article I'll show how I used some of the Neovim features to create a quick way to get rid of my bad habits. If you never used the floating window it should be an introduction to get started with this feature and give you some inspiration to use it for your own needs.

The problematic mapping I added to my .vimrc is the following:

This remaps s in normal mode to <C-w> which is the default mapping to access window commands. For example instead of using ctrl+wv and ctrl+ws to create splits or ctrl+wo to focus the current split I can use respectively sv, ss and so (See :h CTRL-W for the complete list of window commands if you are not familiar with them). This feels more comfortable to use a single key rather than pressing a key chord.

The issue with this mapping is that s is a built-in Vim command, :h s says:

I've never found a use case where this is actually helpful (as the doc says cl does almost the same thing) so remapping it didn't really affect my productivity. However when I edit files on remote severs where I haven't uploaded my config my muscle memory makes me press s and I end up editing the current buffer instead of manipulating my windows which is irritating.

When I decided to get rid of this nasty habit I removed the mapping from my .vimrc but I also needed something to annoy me out of using it. An easy solution would have been to remap the key to <Nop> so that it does nothing but then the command silently fails and I end up executing the second part of the command (v, s, o...) which is not ideal for my workflow. That's when the floating window comes useful. I wanted to have a very visible warning saying that I used a command I shouldn't have and that I should try again with the right command.

Here is the solution I came up with:

This floating window is shown when I press a command I want to avoid. There are a few features I wanted to have in this solution:

The first step get to this solution is to create a function spawning a new floating window:

We begin by creating the buffer which will be shown in the floating window. Neovim provides the nvim_create_buf() function to create an unlisted buffer and return its reference.

We then need to call nvim_list_uis() to get the currently attached UIs. In my case I only have one UI (the Neovim instance open in my terminal) so I can directly use the first item of the returned list, there are probably some cases where one would want to be more thoughtful about the way to get this info but for now I want to keep things simple. We will then use ui.width and ui.height to get its dimensions.

Finally we can use nvim_open_win() to open the floating window. The function takes three arguments:

Calling this function with :call BreakHabitsWindow() will spawn a simple empty floating window:

My second requirement is to have a box drawn in the buffer to show the borders of the window. There are a lot of different ways to achieve this but Neovim provides a convenient nvim_buf_set_lines() function to set the content of a buffer.

We start by creating the strings to use as the first and last lines and as the ones in between thanks to repeat() and put them in a list:

Adding that to our BreakHabitsWindow() function we get the following result: 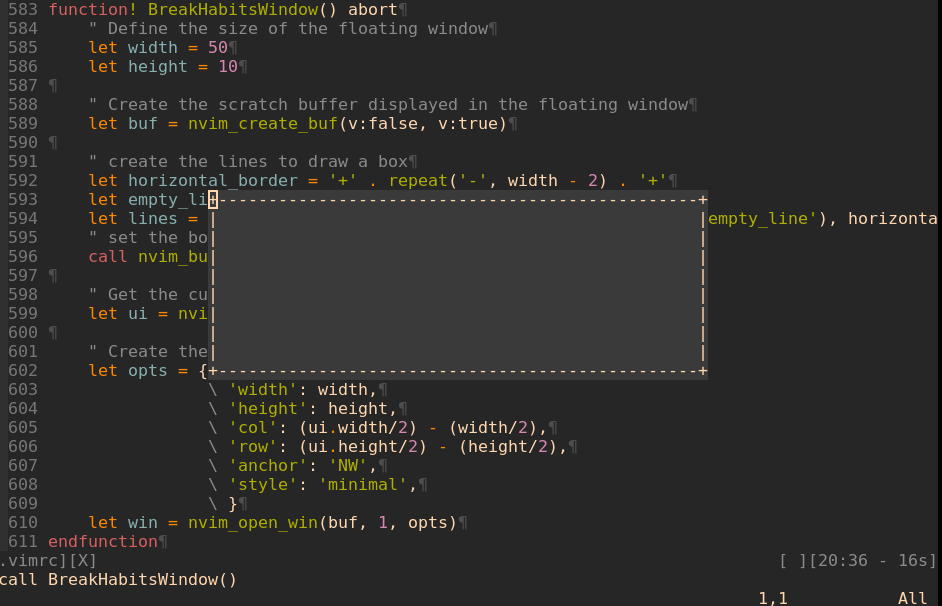 Adding a message in the window 🔗

Next step is to show a message in the window. To do that we will add a parameter to the BreakHabitsWindow(). As we want multi-lines messages this parameter will be a list of strings with each item being a line.

To add this message in the window we will use nvim_buf_set_text(), as the doc says this function is preferred to nvim_buf_set_lines() when only modifying parts of a line.

The function takes as parameters a buffer reference, the position of the text to replace (start_row, start_col, end_row and end_col) as well as the text to use. So we loop over each lines of the message, compute the position and put it in the buffer:

We can now call the function with the right parameter :call BreakHabitsWindow(["Hello world", "This is our floating message"]) and here we have a message in the window: 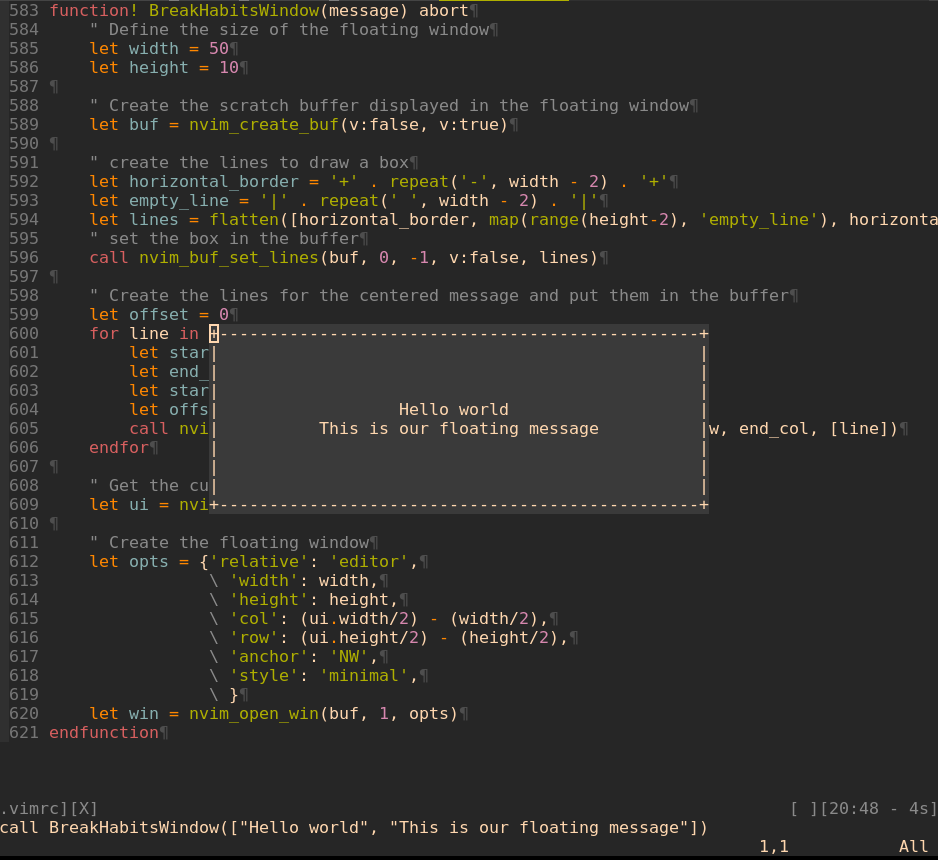 Once the window is spawned I want to be able to close it easily. Using :close is an option but I want something faster and it is the opportunity to explore nvim_buf_set_keymap(). This function allows to set buffer-local mappings. Let's define our closing keys and make them call :close:

With this added to BreakHabitsWindow() we can now close the window quickly with our defined keys.

We can finally add a last touch to improve our UI, using nvim_win_set_option() we can define a different highlighting group for the Normal highlighting group to change how the text is displayed. I went with ErrorFloat because I liked how it looks but it is possible that this highlighting group is not defined on your setup. You can use :highlight to list the groups available to you, and check :h 'winhl' for more details about highlighting:

And here we are: Now that we have a function which spawns the window as we want it the last thing to do is to remap the commands triggering our function. I wanted an easy way to create several mappings with different messages. We can do that with a simple function:

This makes use of the :h nvim_set_keymap() which works like nvim_buf_set_keymap() but to create global mappings rather than buffer-local ones.

There is one caveat with this method: As the message list is stringified, there might be some escaping issues (for example using "<C-w>" in one of the string breaks the function). There is probably a workaround for that, maybe using :h funcref() but I still have to work on that.

Let's use the autoload feature by moving the code to ~/.vim/autoload/breakhabits.vim and then we can call it from our .vimrc like this:

And here we have a finished solution. So far I have been pretty contented with how it works and I'm already fixing my muscle memory, which was my goal! Here is the complete code:

What about creating a plugin? 🔗

I thought about turning that into a plugin available on github but I decided not to go with it for two reasons:

Firstly this is my first time messing with these Neovim features and I'm not entirely sure that I followed every best practices with them. I don't feel like maintaining a public plugin with this code.

Secondly -and this is more important- I think that this kind of feature is pretty sensitive. I have seen countless new vim users following ill-advised plugins like vim-hardtime or worse vim-hardmode. More often than not people using them don't understand the larger picture of their issue and these plugins get in their way instead of helping them improving their workflow. I don't want to create another instance of this kind of plugin.

I hope that this article was useful for you if you never used the floating window. There are already some plugins making use of this feature like coc or fzf but I'm sure there are other more lightweight usages you can add to your config: Don't hesitate to share them with me either on Reddit or in the comments!

Posts in the same category: [vim]