A first exploration of shaders with p5js

For many years now I had the idea to play with shaders in the back of my mind but I had never dared looking into it because that seemed like a very complex topic which I didn't have time to dig into. A few days ago I finally started my first project using shaders and I want to share this experiment, both for documenting purpose so that I can build on top of that in future projects but also to show that it can be fairly easy to some satisfying results.

If you have some basic understanding of how p5js works your shouldn't have trouble following this article. If you never used p5js, you should now it is a nice Javascript library for creative coding which allows you to draw in a HTML canvas, and you also should be able to follow what's coming next.

As this is my first time playing with shaders there are clearly a lot of things I don't know yet and I may have made some obvious mistakes (if you spot them please point them out to me). My goal here is not to show how to create the best possible graphic project but to give you a taste of how it is possible to use shaders in your browser and how to get started. At the end of the article I list a bunch of resources which should be useful to anyone curious to use shaders in their projects.

The source code of the project is on Github and a demo is hosted on this Github page.

My goal was to create a color picker as one could find if they duck "color picker" because this is a simple graphical application which doesn't require complex math or 3D understanding. So that's what we will be building today.

Before we begin here is a very quick reminder of what a shader is:

A shader is a small program that runs entirely on your graphics card (GPU) rather than on your processing unit (CPU). It is executed in parallel for all the pixels which should be rendered making it very fast to draw on the screen. The shader is responsible for deciding which color each pixel should be.

A first color picker without shader 🔗

To start working with shaders I wanted to keep things as simple as possible and I believe using p5js is a great way to achieve that. I was already familiar with this framework and it makes it very easy to get going with a project. The cool thing with p5js is that we can start implementing our code in Javascript and then drop in the replacement for the particular areas we want to use a shader on.

So I first created a simple fully javascript version on codepen. This was the opportunity for me to learn how the HSB color system works:

This first version isn't that bad but is it extremely slow! The draw() function (which is the main loop executed for each frame) has a nested for loop iterating on each pixels of the area showing the color gradient to define which color should have the pixels. This gets pretty expensive when this area becomes bigger. That's when using a shader will become interesting: That will allow us to write a program which will be executed for each pixels in parallel on the GPU and will draw the pixels with the right color. I expect this to result in a much more fluid interface, with no latency between moving the mouse and see the new color on screen.

Note that one could have used the pixels feature of p5js to manipulate the pixels directly rather than creating points as I'm doing in my first version. That would be more efficient and might give a satisfying result for a simple color picker, but still it's not as fun a discovering shaders.

This first version allowed me to define the 3 main areas that I want to render with a shader:

A quick word about HSB 🔗

Before starting to dig into the code it's better to understand the color system we'll be using in this article: The HSB color system!

There is nothing too complex about it, and this website does a great job at explaining in details how it works. Here are a few points to keep in mind:

Note that you'll also find online some references to the color systems HSV and HSL. If I believe the wikipedia page HSV is the exact same thing as HSB excepted Brightness is named Value. And HSL is Hue, Saturation, Lightness which is kind of the inverse of Brightness (if you want details, check wiki they explain it better than I'll do).

Now that we know what our project should look like and we understand our color system let's get started with shaders! The first step is to use a very basic shader in a p5js project. Fortunately the doc gives a good example of a very simple usage:

This will use a shader named basic to draw a rectangle on screen. The interesting part is then to implement this shader. As we can see in the loadShader() call we need 2 files to define a shader:

These files are written with GLSL which is a widely used language to program shaders, this is the language we will use the shader files in the articles.

My basic understanding is that the vert file is used to calculate the screen position of the different vertexes (i.e. points forming the shape) we want to draw. This comes in pretty useful when one needs to draw a 3D shape, but that also considerably increases the complexity of the shader. For now we will focus only on 2D drawings, so our vert file will be pretty simple and it will be the same in all of the shaders we will talk about in the rest of this article. It looks like this:

As you can see from the comments I didn't write this code: I stole borrowed it from this amazing github. I won't go too much into details because really all this file does is take the position of a pixel aPostion translate its x and y components to the top left corner —this is necessary given how p5js and shaders work together— and send this position via the gl_Position to the frag file.

All the fun will happen in the frag file which is responsible for drawing the pixel with the right color at the position it is given. Let's begin with a very unexciting frag which draws all the pixels in red:

In a frag file you must set the gl_FragColor variable: This will tell the shader which color to use for the current pixel and that will stop the execution of the main() function. The gl_FragColor takes four components R (red), G (green), B (blue), A (alpha), which is a common way to describe a color with the RGBA color system. Note that usually the RGB components range between 0 and 255 but in a shader all values range between 0.0 and 1.0, that's why red is 1.0, 0.0, 0.0 (and blue would be 0.0, 0.0, 1.0) 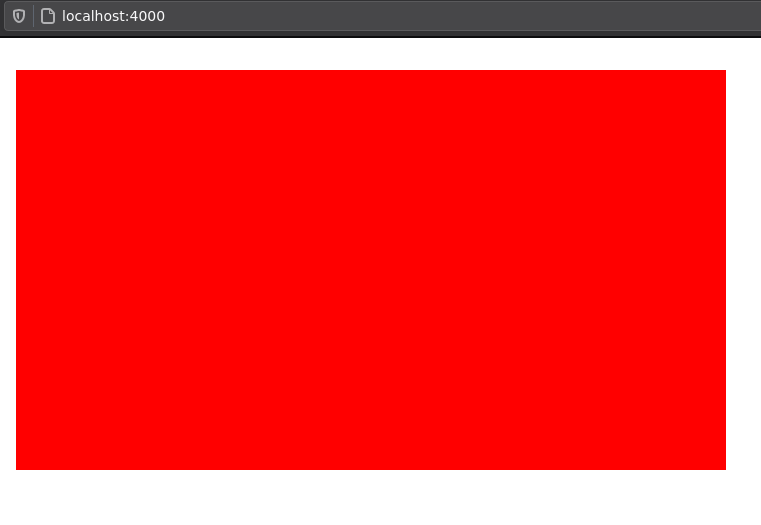 Our red rectangle quickly becomes boring so let's work on our rainbow area which will allow to choose the hue of the color in the sample. To do so we will keep the same vert file but we will change the frag file a bit:

Here the code gets a bit more interesting. First we pass a uniform u_resolution, this is a variable which will have the same value for all the pixels. This uniform holds the size of the shape drawn in the page and it is sent to the shader with the p5js function setUniform(). It is used in the main() function to normalize the gl_FragCoord variable and store this normalized position in st (which is a standard name to do this).

We can then use the x component of the normalized position to define the color of the pixels. I reused a helper function I found on Github to convert HSB to RGB.

Now all we need is to add the uniform to our draw() function: 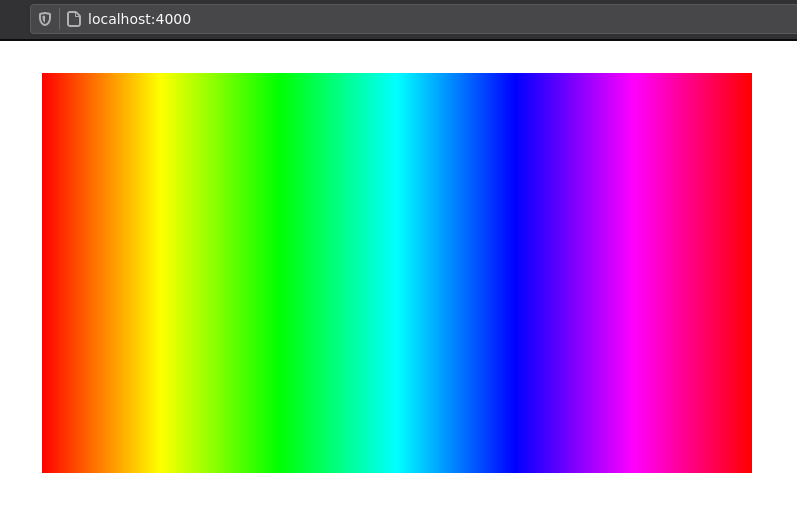 We now know how to create a plain color rectangle and a rainbow rectangle, the last thing we need to draw with a shader is our "picker" rectangle. This area will show a gradient of color: We will use the same hue for the whole space but we will change the brightness along the y axis and the saturation along the x axis. Again the vert file doesn't change and the frag file will be very similar to the one for the rainbow shader:

The principle is very similar to the rainbow shader, two things change:

In the draw() function we will use the following line to set the hue depending on the x component of the mouse position:

And here is our result!

Don't be fooled by the potato 🥔 quality of my screencap, the actual webpage doesn't have these ugly artifacts.

Now comes the part where we put everything together to get a working color picker. We don't need to change the shader files anymore we will just edit the p5 sketch to get the user inputs and draw what we need accordingly.

The user will have two ways to interact with the picker:

Each change in hue, saturation or brightness will be reflected in the sample rectangle showing the currently selected color.

First we will update the preload() function to load the 3 different shaders:

So now that we have three different shaders in the sketch things will get a bit more complex than before. Given our previous draw function I was tempted to do something like this:

But that doesn't work, instead we will need to use a buffer canvas in which we will draw with the shader offscreen. Then we will use this as a texture for the rectangles we will draw on the canvas onscreen.

That sounds a bit barbarian but in practice it's not that bad.

First we need to update setup() to create these buffers and give them the dimensions of our future rectangles to draw:

With that we get the same result as our first example i.e. a simple plain rectangle. We can reuse the sample principle to draw our two other rectangles:

And here we are!

Now adding a bit of logic in our sketch to detect when the user clicks on the screen and convert the mouse position into the HSB values, doing some additional conversions to get the RGB and hex values corresponding to the current selection and putting all of that in a terribly bad looking UI and we have a complete color picker:

An online demo is available here, it doesn't work very well on my iPhone but it looks like it's ok on both Firefox and Chromium.

A new world of opportunities 🔗

This project was really fun to do and I hope that if you never played with shaders before it gave you some inspiration to do the same! I am really excited to use this new skill I learned because I've done a few simulations in the browser with p5 before but they were all limited by their performances. Offloading some of the work to the GPU should allow me to create simulations with much larger definitions. I'm thinking about trying to make a Critters cellular automaton, exploring fractal or maybe maps generation as seen in some of Sebastian Lague's videos.

If you also want to get started with shaders here is a list of some interesting resources:

If you know of other good resources or want to discuss a project idea, leave a comment on this article!

Posts in the same category: [p5]